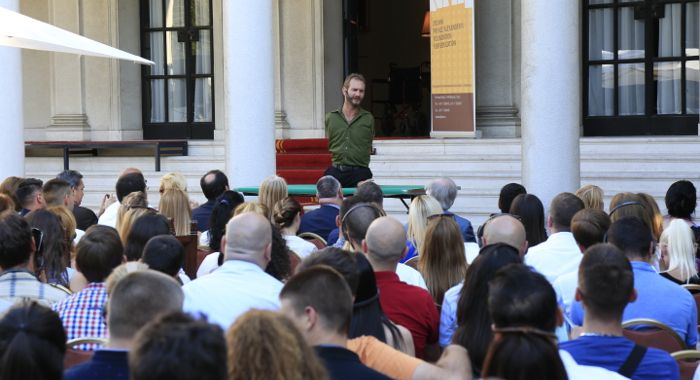 Jul 13, 2017 ALUM, ITAcademy, BusinessAcademy 0 comments
On Friday, Nik Vujičić, one of the best-known motivational speakers in the world, gave a signature lecture on hope and finding the meaning of life in front of an audience at the White Palace in Belgrade.
Owing to the successful cooperation between LINK group and the HRH Crown Prince Alexander Foundation, the lecture was attended, free of charge, by students from ITAcademy, BusinessAcademy, as well as the students of the Academy of Fine Arts and Multimedia.

“I was impressed, since previously I haven’t had the chance to listen to Nick. The very fact that we could listen to his lecture in a small group was great. I am overwhelmed. I’ve learned how much the little things in life matter and that we have to focus on them to improve our lives”, said Anja Petrović, a student at ALUM.

The other attendees were equally impressed by the lecture.

”The speech was quite encouraging. Although people in Serbia think that life abroad is much easier, Nick has a point in saying that we create our own happiness, regardless of objective circumstances”, stated Nikolina Mihaljević Stojanović, an ITAcademy student.

Due to a genetic disorder, the Australian of Serbian origin was born without arms or legs, however, thanks to his strong spirit and immense motivation, he managed to overcome his physical disability and lead an independent and fulfilling life.
By sharing his experience and giving hope to people, he has become one of the best motivational speakers in the world. He is also known for his nickname, Mr. Pillow. As a child, he went through unimaginable problems and challenges. However, the problems made him stronger, and it’s because of these difficulties that he has gained international recognition for his motivation theory.

It’s all about having a goal in life

His main message to people is that the most important thing in life is to have a goal and strive to achieve it.

Nick gives lectures all around the world, and apart from Belgrade, this year’s visit to Serbia will also take him to Subotica.