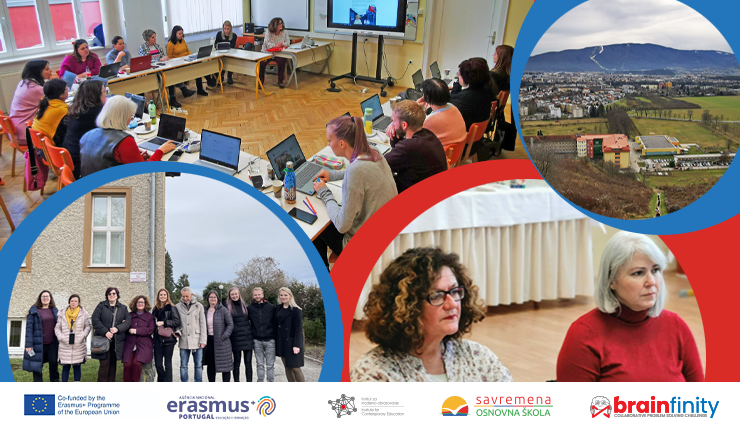 A big step towards the internationalization of the Brainfinity competition

Brainfinity is a competition in which elementary and high school students solve real-world problems as a team using information technology.

The competition is organized by the Institute for Contemporary Education every year and is becoming increasingly popular. This year, Brainfinity took a big step towards internationalizing the competition. Thanks to the Erasmus+ program, students from four European countries (Portugal, Slovenia, Bulgaria and Serbia) will be able to join the competition. This is an opportunity for them to experience teamwork in an international environment and learn from students who have different perspectives and experiences and who are from different cultures.

Kick-off in Maribor started in a great atmosphere with partners

Working with partners on the preparation of a project application often makes a bond between us that we get the impression that we have known each other for years. Kick-off meetings are usually full of positive energy, both because of the eager anticipation to meet and agree on everything and finally start the project, and because of the opportunity to shake hands or hug our good online friends after a long virtual acquaintance.

The atmosphere at the meeting in Maribor was amazing, which officially started the Erasmus+ "Brainfinity" project. It was organized by "Smart Idea", the company of our dear project mentor Igor Razbornik, thanks to whom we met our dear partners with whom we started this project. Thanks to our partner from Portugal – school center AEG1, who accepted to coordinate the project, the National Agency of Portugal approved the funds for the project.

A consortium consisting of one school and one organization from Portugal, Bulgaria, Slovenia and Serbia gathered in the pleasant space of the Diocesan Gymnasium in Maribor and discussed different aspects of project implementation point by point. That was also an opportunity for the partner organizations to introduce themselves to each other, but also for the participants from ICE to introduce Ivan Anić, the author of the Brainfinity challenge concept, who gave an introductory explanation to everyone present via video link about the type of challenges our students have to face in their favorite problem-solving competition. After Ivan's introductory presentation, many meeting participants started solving tasks they found on the existing Brainfinity website, which will also gain popularity on an international level during our project.

A less official part of the meeting was dedicated to sightseeing in Maribor and socializing while tasting the best Slovenian dishes and their excellent wines. The hosts have also prepared a small "challenge" for us – a slow walk to the viewpoint above the school, which you reach after climbing over 450 stairs. Encouraged by the meeting and shared enjoyment, we now return to our work tasks and start preparing the materials necessary for the implementation of our project.